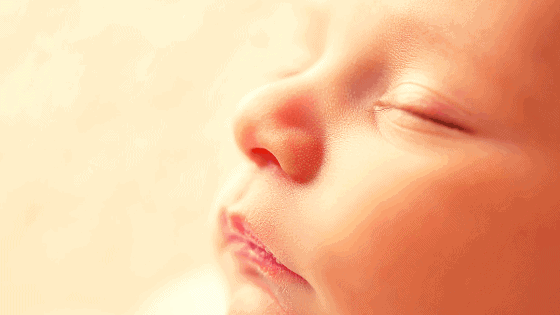 Bringing a baby home and hearing them having trouble breathing is the worst. Baby congestion is more common than you would think because in those first couple of weeks they’re still trying to get fluid out of their lungs from being in the womb.

When we brought our baby boy home the plan was for him to sleep in the same room as us. I was a new mom- I was terrified to even close my eyes at night.

Our plan was to have him sleep in the pack-n-play and to close the bedroom door so I wouldn’t worry about our cats wanting to climb into bed with him.

Well after a few short nights of being home my baby was waking up every hour, because he was having trouble breathing. When I asked the Doctor about it I was told it was probably allergies and to put a humidifier at the opposite end of the room.

After 2 nights of trying a humidifier things only worsened.

I know you’re probably thinking, he’s allergic to the cats! I thought so too, but it was only at night. He didn’t have a problem when he took naps during the day or if I was holding him. It seemed to be after 1 am and would continue until he got up in the morning… crazy, right?

I tried to pay attention to what was going on and what was triggering this problem. I considered my surroundings. We’re living in a trailer while our house is being built and there’s not a lot of air circulation in the bedroom. I moved him into the living room where it is open and plenty of airflow.

And this is where we’ve stayed. In the living room. Baby in the pack-n-play. Mom on the couch.

My husband must be loving having the bed all to himself.

Being the dedicated Mother that I am, I have been sleeping on the couch for over 3 months now.

We went through numerous ideas trying to get my baby to breathe and this is what has worked, so why change it right?

I’m going to share with you everything I tried, hoping you don’t end up on the couch like I did.

With allergies, having fans blowing can stir up allergens into the air. Turning fans off will settle those allergens and make the dust settle.

Try getting allergens completely out of the air. Air purifiers capture allergens, dust, and pollen in a filter and produce clean air.

Change filters in the furnace

We brought our little one in March, which is the middle of winter in Kentucky. It would snow a foot then be gone in 2 days. Typical Kentucky weather, if you don’t like it wait 24 hours and it’ll change. We changed the filters in the furnace thinking maybe it was the nasty trailer air, but again- helped for a little bit then we went back to having trouble breathing.

I spent hours watching my son trying to figure out what was causing him to have trouble breathing. We would end up in the living room sleeping in the recliner because that was what worked. I thought maybe his nasal passages were just tiny and maybe laying flat was causing him to snore?

Using a Boppy Pillow to tilt his head up, I was able to make him feel like someone was holding him. I worried he may scoot down in it, so I used a blanket wrapped around it, so if he did slide down there was no way it would get around his face. They also make wedges you can put under sheets or mattress to have them at an incline, also helps with reflux and colicky babies. These are much safer!

Essential oils have played a big part in our daily lives and I believe have played a huge role in why we haven’t been sick in a long time. I tried oils that were safe for newborns and would help with breathing. As long as they were being diffused, my little wouldn’t have a problem, but shortly after the diffuser quit he would start having problems again.

I wanted to try Vick’s Vapo Rub, but my little was too small. Vick’s said for 6 months and older and here my boy was only a month old. He was having trouble breathing at just a few weeks old, so we looked into Dr. Zarbee’s Rub. It was recommending 3 months and older and was all natural. After calling the Doctor’s office, as long as I watched for allergic reactions we were good to try it.

It has essential oils in the rub that you can apply on either their feet or their chest. I thought I would try it on his feet first and if he had a reaction to it- I could wipe it off.
That first night, he slept. Hard.

Then that second night, I actually got some sleep. It. Was. Amazing.

I would have to apply it after every feeding because he would have trouble as soon as it wore off every 4 hours, but it was amazing when it did!

My husband got me an Angelcare Baby Monitor that will sound an alarm if the baby stopped breathing for 20 seconds. It gave me a lot of peace at night because I started getting nervous when I wasn’t hearing the baby congestion anymore. This thing is amazing. It alarmed me a couple of times because he’s rolled off of it, but I would rather have a few false alarms over anything else.

Over time I didn’t have to put the rub on his feet anymore. I’m not sure if his nasal passages opened up more? There weren’t as many allergens in the air? Not sure. But after many trial and error attempts we finally found something that worked. We’re still sleeping in the living room, because why mess something up that’s working? But I found something that kept my baby comfortable and sleeping through the night, so I hope that you can too.

Have you had newborn breathing problems? What worked for you? I’d love to hear if you have other tips that helped your little out!

This post may contain affiliate links. Please read my disclosure for more info. Thank you.

How To Prepare Pets For A Newborn

Most items ship in 5-10 business days. Please email if you have any questions. Dismiss